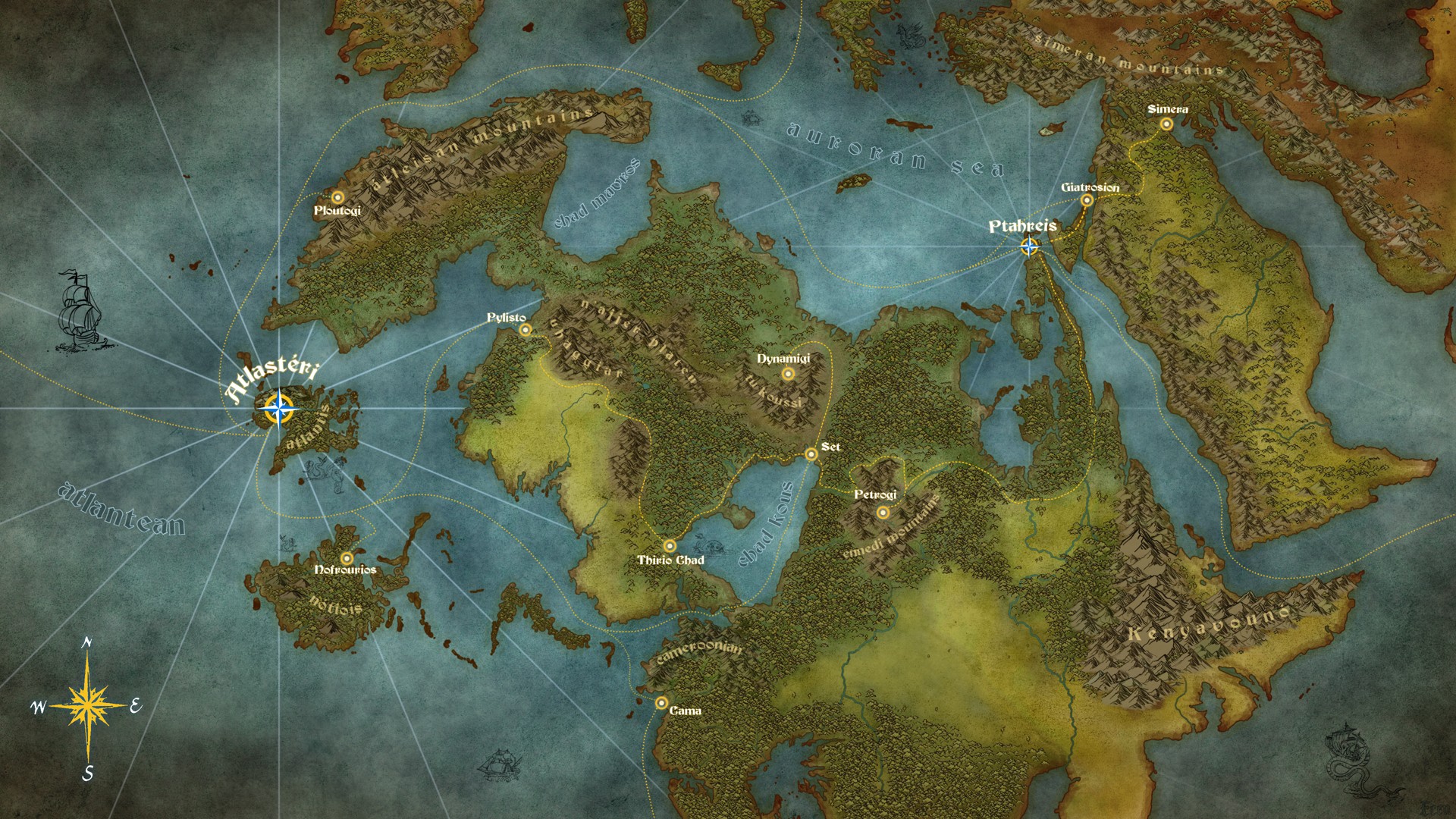 (A friend of mine recommended listening to Light of the Seven while reading this.)

Before the Younger Dryas climate catastrophe, the Atlantean empire ruled what is today North Africa and the Sahara Desert from the great city of Atlastéri, the Star of Atlas. At this point, much of the African area lay 300 meters lower than today’s level, and as such, the towers of Atlastéri proudly gazed across the sea from atop the Richat Structure, on which the city was built.

Whether by accident of Atlantean technology or natural catastrophe, most of the Atlantean Empire was destroyed around 10 000 BCE. Water levels spiked, swallowing Atlantis in the sea for a century, after which the entire continent rose to today’s level over the next millennia.

Few Atlanteans survived this disaster. For generations some remained protected in the remnants of Ptah workshops or hidden away in the Simerian mountains. Eventually they emerged, but with most of their old knowledge forgotten, these people could never hope to restore their lost civilization. Even so, what little knowledge remained was more than enough to spawn new sparkling empires, even if but shadows of Atlantis.

This map is based on the notion that Atlantis might have been a city built on the Richat structure in a time where sea levels were somehow 300-400 meters higher than today. I’ve traced African coastlines based on floodmap.net when water levels are raised by 340 meters and placed mountains with based on the Maps-for-free Relief Map. I’ve also had much inspiration from u/grammatiker’s great map The Atlantean Empire - A Wet Sahara.

Locations on the map are placed near known locations of ancient civilizations or completely made up. Similarly, names (which all use the Becker font) are based on ancient history mixed with greek words for what that city did in my version of Atlantis. (For example, consider if the Egyptian god of craftsmen Ptah was actually an Atlantean inventor.)

This was my first map with Wonderdraft and it was a really fun small project, learning a bit of African history and pre-history as I went along. Equally fun was developing this fantasy of Atlantis as an ancient civilization before any other. An empire in an age of sail, yet with a grasp of some technology, be it alien or mystical, that is still far beyond our reach today.

One thing that Wonderdraft didn’t allow for, was setting one color for the ring, and another for the dot, in the location marker I wanted use. Instead I created my own similar icon, but which supports that feature when imported in Wonderdraft. It is available in my Wonderdraft Assets Pack.

The map itself is licensed under CC-BY-4.0 so anyone who wish to use it may do so. If you do use it or build upon it in some way, I would be interested in seeing what you create! It is always fun to see new awesome things :)

I was recently introduced to the Richat Structure Atlantis theory via some conspiracy theory (-isch) videos on YouTube. Thus I want to emphasize that all evidence for Atlantis being an advanced ancient civilization that we have somehow missed, are very weak. Very few arguments hold up beyond seeming plausible at first glance. It does make for some fun fantasy/alternate history settings though :)