March Across the Belts, Scandinavia 1658 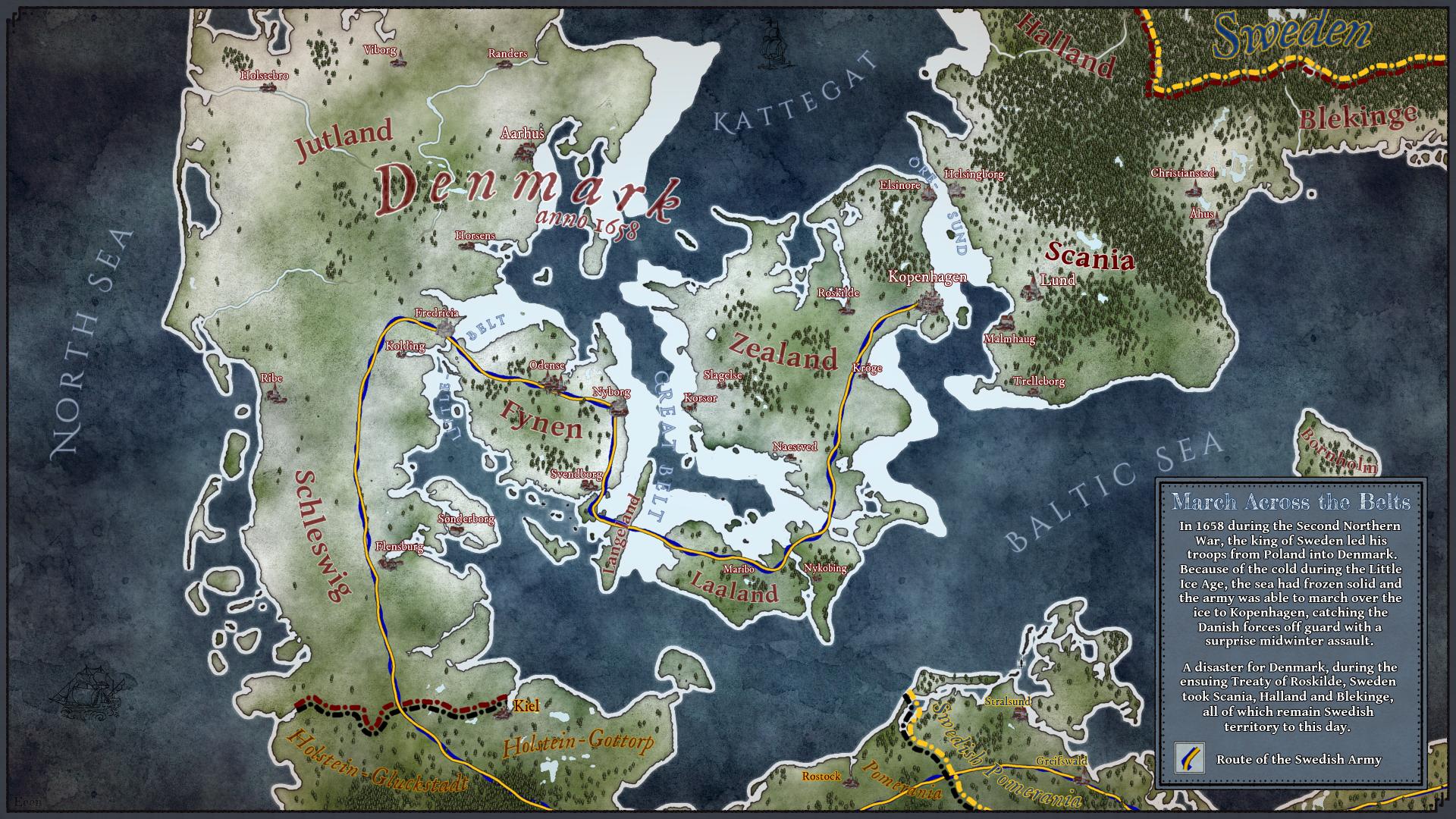 March Across the Belts, a map depicting the Cimbrian Peninsula, southern Scandinavian Peninsula and the borders of Denmark and Sweden in 1658, just before the Treaty of Roskilde, was my submission to the first official Wonderdraft map competition with the theme The End of an Ice Age. My intention was to share a slice of Scandinavian history and of what I think is a fascinating story.

I am no historian, but during the making of this map I made cursory historical research on all cities and towns marked on the map. This allowed me to, for instance, give the size and buildings shown as town markers some relation to what their corresponding town might have been like in 1658.

The map was made to be quite accurate to real life, but I’ve taken some creative liberties. For instance, names of towns are a mixture of Danish, Swedish and English names of those places, from then and now. Also, how the ice would have been arranged in 1658 is complete speculation, and so is the route of the Swedish army, except the key points where I know they crossed: Fredricia, Nyborg and the general route from there to Kopenhagen.

In 1658 during the Second Northern War, king Charles X Gustav of Sweden led his troops from Poland, through the relative safety of Swedish Pomerania and into Danish territory. This winter was the coldest in living memory, part of what later came to be called the Little Ice Age, and the sea over the Little Belt and Great Belt had frozen solid. Making a gamble based on investigations by royal engineer Erik Dahlberg, it was decided to cross the ice. The ice sheet creaked and sagged enough that soldiers had to walk up to their ankles in water, but it did not crack. Eventually, the entire Swedish army, including cavalry and artillery, made it to Zealand and Kopenhagen. There, the Danish army who had expected a Swedish assault in spring at the earliest, panicked and surrendered.

During the ensuing Treaty of Roskilde, Denmark had to give up all their land on the southern part of the Scandinavian Peninsula, including Scania, Blekinge and Halland, all of which remain Swedish to this day.

A period of cooling said to have started in 1250 and quickly receded after 1850, the 1650’s marked a turning point of the Little Ice Age with the coldest Scandinavian winters known either before or after. Year 1658 was perhaps more the beginning of the end of an ice age than a true end, but the once-a-millennia opportunity of a winter assault by marching over the frozen sea makes for a fascinating story nonetheless. Even more so by how much it changed the Scandinavian geopolitical landscape, even until today.